Are Pop Top Caravans Good? A Pros and Cons Discussion

Are Pop Top Caravans Good? Pop tops have always been popular, especially in Australia and South Africa. This caravan offers many benefits for the types of terrain common to these parts of the globe. For example, they’re not as heavy and do not consume as much fuel as their ‘fixed-roofed’ counterparts. So this will allow you to conserve fuel; because there’s less need to refuel on those long, long journeys inland with nary a fueling station in site. Another benefit usual in these terrains is that the pop top’s reduced height will allow you to take it further into remote bushland.

But pop top caravans are not limited to only these areas. If you live and travel around mostly hot or humid places, take heavily treed off-road paths, or have issues with storage you would be well served to consider the pop top caravan. 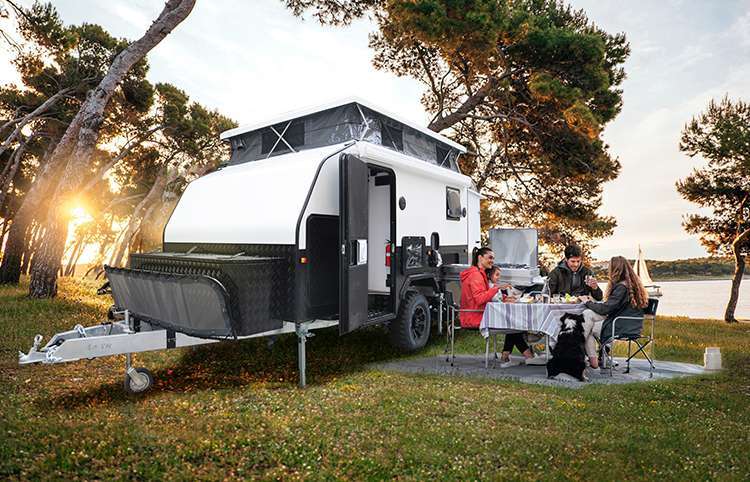 Yes, yes they are. And today we discuss whether they’re good for you, and the particular areas you frequent.

Lately, there has been a growing trend toward exploring Australia’s breathtaking nature; and it won’t be long before other places follow suit. The US also has a marked increase in RV purchases.  In many areas of the US are ideal adventure grounds for the pop up caravan.

While some people choose to simply bring a tent and a sleeping bag, along with other camping essentials in their trunk; others opt for more luxurious travel options. Namely, in a caravan or RV. This mode of transport for leisure and travel has long been a popular choice for campers and adventurers. And they’re just getting even more popular in the current state of affairs.

More and more, pop-top caravans are emerging as the cheaper, more compact alternative to standard caravans. If you are considering buying a pop top camper for your travels, here is all you need to know before buying; including the hows, why’s, and the pros, and cons.

Pop top caravans, what are they?

Hold-up. Just before we dive deep into the pros and cons of pop top caravans, it will be to our benefit to first understand what a pop top caravan really is. Is it just basically, a caravan with a roof that you can expand and erect? The answer is yes. This is essential to all the differences between the pop top caravan and a regular one. Today’s star is the same as a standard caravan, but with just one main difference: the canopy.  Aptly named, the pop top has a top that you can pop open and close to increase headroom and facilitate easier trailer transport. There are several types of hinged roofs available. These include hard, heavier roofs or softer and lighter fabric tops.

The hooded caravan means you can easily raise the roof in less than 2 minutes. The added space gives you more usable space when parked. Plus, when this space is no longer available and the journey is about to begin, one can lower the roof in even less time. When on the road, the built-in canopy in the caravan is positioned as if it were a rigid caravan. This makes it easier to transport.

Caravans of this type are ideal for long routes. In essence, the raised roof gives the caravan more space when it is used for sleeping or living. But it also gives you the ease of a smaller, shorter vehicle when in transport, allowing it to become compact.

Pros and cons of a Pop top caravan

So, are pop top caravans good? And we’re not talking about them in general, but regarding its compatibility with you and your usual playing grounds. To establish your answer to that question, we present to you, the advantages and disadvantages of the pop top caravan.

Are you on a budget but would still like the kind of space that the pop top can offer? Then lo and behold, this one’s for you.

Because of its compact size, a pop-top caravan with the top down is much easier to transport. It usually does not weigh as much as the towing vehicle. It also has lesser wind resistance and is easier to maneuver on trickier roads compared to more conventional caravans.

In addition to being easier to transport, you also have more freedom in how to transport the caravan. More choices in what vehicle to use. Because it’s lighter and easier to tow, this makes it compatible with more kinds of towing vehicles. This includes smaller cars that would usually be hopelessly incompatible with more conventional caravans/RVs.

And because there is less drag or wind resistance with a pop top caravan in tow, due to its lower roof height, the caravan also offers better fuel economy and stability. Add to that, it’s lower weight is also a contributing factor.

We actually found a wonderful test made our good friends at GoRV.com.au on the fuel economy of two caravans of roughly the same size: with one a pop top, and one a conventional caravan. Here’s what they have to say:

To achieve a meaningful result, I figured it would require a couple of hundred kilometers per van. At Goldstream’s Pakenham, Vic, headquarters, I first hitched up the pop-top to my Isuzu MU-X and headed to the nearest fuel station, where I topped up the diesel to the point that it was almost overflowing.

From there, I headed east towards Traralgon, a regional Victorian city about two hours from Melbourne. In Traralgon, I intentionally spent 15 minutes in stop-start traffic before heading back.

On refilling at the same Pakenham servo, it was revealed that by towing the pop-top for 209.8km, the 4WD’s 3L engine guzzled 30.63L of diesel.

Time for the second test. I repeated the scenario described above, this time with the full-height van hitched up.

On the highway, for both tests, I kept my speed to about 95km/h, keeping to fifth gear as much as possible, and driving as smoothly as conditions allowed.

After almost six hours of continuous driving, I pulled into the servo near Goldstream for the third time that day. The odometer, which I’d zeroed before departing for the second run, read exactly as the previous test: 209.8km.

The MU-X consumed 34.96L of fuel when towing the full-height caravan.

Pleased, I refilled, sure that my vehicle had used more fuel on this second test. I was surprised, though, when the diesel pump returned a figure of 34.96L – an increase of 4.33L.

The numbers – The pop top

Towing the pop-top – which had been loaded up to closely match the full-height caravan in weight – on a highway for a couple of hours, throwing in a bit of around-town traffic, saw the MU-X use 14.6L/100km of diesel. This equates to 6.85km/L.

The numbers – The caravan

Towing the full-height caravan on the same course, and matching my driving style to that of the first run as much as possible, saw the vehicle consume 16.7L/100km, equating to 6km/L.

Per 100km of towing, the difference between the full-height caravan and its pop-top equivalent was 2.1L.

I set out to see if towing a pop-top would be more fuel-efficient than a full-height caravan, and by eliminating the weight variable, I was able to show that the lower towing profile of a pop-top – in this case 400mm lower – did indeed make a difference at the bowser.”

For a caravan of its size, the pop top actually offers great storage and living space. And these, without the disadvantages of a bigger vehicle. For example, in a conventional caravan of roughly the same total dimensions; you’ll be hard-pressed to get as much standing height room without sacrificing other living space.

Pop tops are usually way smaller than regular caravans that offer just as much living space. The storage when not in use aspect is another area where they shine. Due to its smaller dimensions, you can store this rig in a lower garage or under a carport when you’re not out on road trips. Some can even fit in carports with lower-than-average heights.

Many pop tops have roofs made mostly entirely with canvas, or even more common still are those with extendable sides made of canvas.  This helps your caravan take in more light, especially if made with brighter fabric. It’s also not as stifling as harder frames in warmer, more humid weather.

A cursory check of the market revealed that they actually depreciate less in value compared to other campers. So in the long run, a used, well-cared-for pop top can actually fetch a good chunk if you decide to sell yours in the future.

We might have highlighted the added space and headroom that the pop top can give but it’s still not as big as most conventional caravans. So if you’re after that extra-extra storage, you might be better off with something else. After all, a small RV, albeit with a lifting roof, is still small with an extension. It is not designed to accommodate many people if you are a big family or group.

And even with the roof fully elevated, some models do not offer maximum headroom that covers the entire length of the caravan.

If you’re hoping to pass cold weather for an extended period, or god-forbid, some winters in your caravan, then run away from this one. With that extendable roof that is mostly made of lighter, airier fabric than a cold, hard frame, you can’t hope to be well-insulated in this rig.

In addition, the fabric sides on most pop tops, no matter how durable, are still potential weak spots for sudden tears from sharp branches or unexpected water leaks in rainy weather.

If you’re a light sleeper, the fabric sides may or may not become a concern on a windy night, depending on how they’re built. They have the possibility to flap around in high winds and keep light sleepers awake.

And in particularly windy weather or storms, you may need to lower the roof altogether.

So after that rundown of pros and cons, are pop top caravans good?

We still say, yes. If you’re going on a journey with mild to hot and humid weather. Or if some of the roads you’re taking are low-hanging. If you don’t mind a bit more compact space than a conventional caravan; but still has pretty good headroom. Or if you have storage issues or a garage or carport with low head clearance. If you drive a smaller car and want a maneuverable rig. Or if you don’t mind having to raise and lower your roof every time you park for the night but prefer a more airy and brighter space instead. If you are a bit short on funds. Or if you plan to take good care of your caravan and sell it in the future.

Editorial Staff at Ecocampor is a team of RV experts led by Tom. Trusted by over 1.3 million users worldwide. 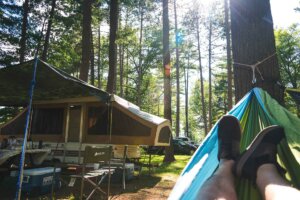 RV
Pop-Up Campers: What They Are and Why You Should Want One 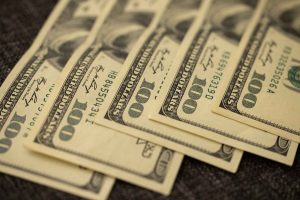 RV
Is It Cheaper to Buy an RV From the Manufacturer?